Q&A with JYO: What Inspired You? 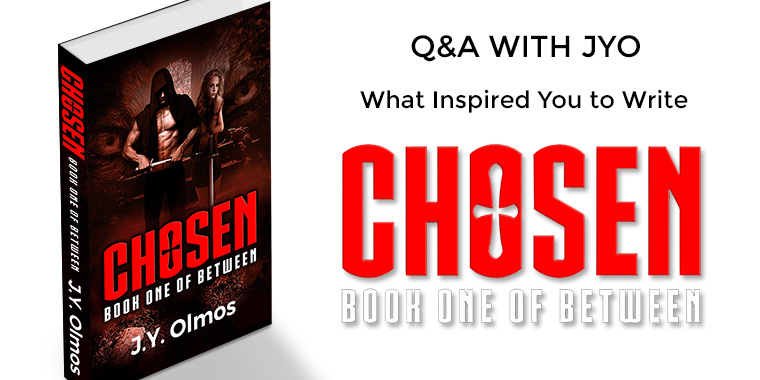 This novel, CHOSEN, seems to be both a creative story or even a biography of a young woman who by fate steps into the world of magic, extrasensory perception, and mind power. What or who inspired you to create the story and how long did you think about it before starting to work out?
For example some of my poems will just pop up and I am done in half an hour on any particular topic. Others I have in my mind forever 21 days or even weeks and then I’ll get inspired to write and it just flows and I might do a little editing after. One opus maximus I am working on is an epic poem about my experience in the Peace Corps which covers about two years so that will obviously take me longer and I have to be in the mood. I started it about two months ago but haven’t worked on it in about three weeks or maybe more.

Thank you for your excellent question.

This story, CHOSEN, Book One of Between, started like all my stories do. I had a recurring dream Actually in this case, it was a nightmare. It stayed with me for several nights, it changed slightly in location or color each night, but the basic idea was the same. I think it affected me for so long because it was visually detailed and also because the fear was so strong that I woke up with my heart pounding, ears ringing and truly afraid. The visual matched that of any number of movie creatures featuring a giant black dog with glowing red eyes and long sharp teeth. In my dream, I was running from this creature that I knew was trying to rip me into shreds. In true horror story fashion, my mind conjured the old 1987 movie Hellraiser.

Turning it into a story was the only way for me to work through the horror of the dreams, and once I figured out a general background for the mutant dogs, the dreams stopped. Even so, that left me with these mutated hounds, retrievers if you will, that were designed to catch a specific prey for the person to whom they reported and deliver the prey to a different realm. That led me to the creator of the hellhounds, who then had to live in that other realm, and if it was evil, then there also needed to be its opposite, the watchers.

On and on in this way, my story began to unfold. I wrote the initial draft in three months, then it took me just over a year to polish it to the point that I felt it was ready for review by an editor. The edit process took another six weeks before it was ready for publication.

I’ve read that experienced authors can bang out a new book every three months or so. I personally don’t know anyone with that ability. Most of the authors in my friend group are lucky if they are able to complete one rough draft a year.

I think the bottom line is to keep at it, don’t wait until the time is right or the muse is whispering in your ear. Sit down and write.

I wish you all the best on your work in progress.